The most common method of treating aquarium water today

Keeping aquarium fish is a pastime, a very elegant and healthy way of entertainment, and it is not very expensive. For aquarists, everyone wants to have an aquarium that is always clear, green, and beautiful. An aquarium with clear and stable water is the top criterion to protect the health of fish. This article will help you fix those reasons

Aquariums have many problems starting from the stage of bringing water into the tank until the start of farming. If the water source is not clean, it is cloudy, infected with bacteria, infected with parasites, contaminated with alum, etc. will cause fish to die when put into farming or underdeveloped. Or get sick leading to death, deformity and spread to the whole herd.

However, after a while, the aquarium will have dangerous warnings such as cloudy, smelly, mossy water. Therefore, that is the reason why we have to find ways to treat aquarium water to ensure the health of the fish.

According to Mr. Hung, a famous longtime aquarist in Saigon who owns a collection of ornamental fish of nearly $80,000, the main reasons for the water in the aquarium are always cloudy:

Causes of cloudy aquarium: Due to excess food, fish feces discharged, due to new water change, the microflora is lost, so NH3, NH4 cannot be eliminated because too much moss clings around the lake, causing blurred glass.

How to treat cloudy aquarium water?

Do not raise fish too thick or raise too many microorganisms that cause excess food to pollute the water. Feeding fish should not give too much food, causing the fish not to eat all of it, polluting the water source.

However, this method should only be used temporarily. In the long run, it is advisable to build a microbial system in the tank so that water and fish food always exist and develop in a sustainable and natural way.

Why is the aquarium mossy? 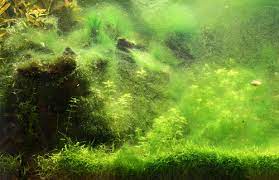 Firstly, the aquarium has too much light: Lighting with lights 24/24 or placing the aquarium in a place where there is a lot of sunlight is the cause of rapid moss growth. You may not know, moss loves light. The excess light caused the tank to quickly become mossy.

Excess phosphate and nitrate: Phosphate and nitrate are two nutrients that mosses and harmful algae are extremely fond of. Nitrates can be produced from fish feces or from food waste. Therefore, when raising too many fish in the tank or giving too much food that the fish do not eat all of it, it is the cause of moss production in the aquarium.

Long time no cleaning, water change: Releasing fish and feeding fish is easy, but cleaning and changing water makes many people hesitate, so it is rarely done. That’s why moss quickly forms. By not washing the tank for a long time, changing the water makes the water dirty and causes algae spores to quickly form and grow.

How to treat a mossy aquarium?